The first issue of Sport Science was published in June 2008 with the first scientific papers in the field of kinesiology. The journal was well accepted among Bosnian and Herzegovinian readers as well as international readers. Sport Science has almost immediately become one of the most esteemed journals. What is significant is that every new issue published scientific papers of greater quality; it expanded scientific research in the field of kinesiology and has made a great contribution in the fields of sport theory, sports anthropology, sports management, sports systems, methodology of sport and so forth.

In retrospect, if the journal Sport Science hadn’t been released, kinesiological research at this University and in this region would not be possible. Hence, the release of this journal has, first of all, encouraged scientific research in the field of kinesiology and its multidisciplinary fields, brought together scientists and experts from Bosnia and Herzegovina and neighbouring countries, Europe and the world; it has accelerated the flow of scientific information, placed research at a higher level, opened up new possibilities for references, scientific research, scientific questioning and confirmation of research results with a higher number of other scientific publications and journals.

Today, however, most of the goals which were set at the beginning have been accomplished. The journal Sport Science has become one of the most prestigious journals in Bosnia and Herzegovina. It has also made an affirmation in Europe and the world.

That is precisely why we know that it is our obligation to continue publishing Sport Science and to make it an even better and more recognised journal. Fourteen issues of Sport Science obligate us to do that. The issue before you has been published after the first international conference in the field of sports, science, education and development - InSEED 2015 which took place in February this year and after which we have launched the third cycle of studies – doctoral studies at the Faculty of Education. In that regard, alongside the integration of the conference, journal and doctoral studies, we have created the preconditions for scientific research and scientific work at the highest level. On the other hand, when speaking about the quality of scientific papers, we believe that the issue before you has created new standards when it comes to publishing scientific research results and the results of scientific papers. 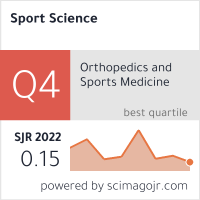